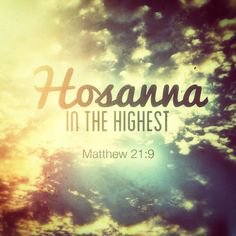 A Little Lesson on the Original Languages

But if you look in a Greek dictionary to find what it means, you know what you find? You find that it is really not originally a Greek word after all. The men who wrote the New Testament in Greek did the same thing to a Hebrew word that our English translators did to the Greek word: they just used Greek letters to make the sound of a Hebrew phrase. I know this sounds sort of complicated. But it’s really not. Our English word “hosanna” comes from a Greek word “hosanna” which comes from a Hebrew phrase hoshiya na.

And that Hebrew phrase is found one solitary place in the whole Old Testament, Psalm 118:25, where it means, “Save, please!” It is a cry to God for help. Like when somebody pushes you off the diving board before you can swim and you come up hollering: “Help, save me . . . Hoshiya na!”

But something happened to that phrase, hoshiya na. The meaning changed over the years. In the psalm it was immediately followed by the exclamation: “Blessed is he who comes in the name of the Lord!” The cry for help, hoshiya na, was answered almost before it came out of the psalmist’s mouth. And over the centuries the phrase hoshiya na stopped being a cry for help in the ordinary language of the Jews. Instead it became a shout of hope and exultation. It used to mean, “Save, please!” But gradually, it came to mean, “Salvation! Salvation! Salvation has come!” It used to be what you would say when you fell off the diving board. But it came to be what you would say when you see the lifeguard coming to save you! It is the bubbling over of a heart that sees hope and joy and salvation on the way and can’t keep it in.

So when we sing “Hosanna” now, let’s make it very personal. Let’s make it our praise and our confidence. The Son of David has come. He has saved us from guilt and fear and hopelessness. Salvation! Salvation belongs to our God and to the Son! Hosanna! Hosanna in the highest!