Many believers try to respond to the “problem of evil” argument against God by immediately trying to argue the facts. Facts do exist, which I will show later, but that is not the first step that should be taken. Rather, the issue can best be settled by trying to define our terms. When someone speaks of evil, what are they actually saying? For anything to be called “good” or “evil” we must first recognize that we are not talking about preferences. What is personally appealing or appalling to us is not in view here. When things are declared to be evil, we mean that something ought to be a certain way but is not. We mean that there is a violation against an intended order and a rebellion against a specific purpose. But where do things like intention, order, purpose, and ought-ness come from? They come from a personal being that expresses both consciousness and intellect . And since we are talking about intentions and purposes that are universal and transcend individual human beings, cultures, and times, these intentions and purposes must come from a transcendent source. This source must be a personality that has the power to impose his will on the world and has the ability to enforce it. This person is who we call God. Good and evil therefore find their reference point in the person of God. If an act or event is evil, it is because it is in direct opposition with God’s revealed intention or purpose.

But this claim is often challenged. From the dilemma in Plato’s Euthyphro, critics point out that either God is conforming to a standard of goodness outside of Himself or that something is good just because God says it is. Either way we see a God that does not deserve our obedience and worship. For if a thing is good just because God says it is, then we are saying that might makes right. And if there is a standard of goodness to which God is obliged, then it is to that standard that we are also obliged. This apparent flaw in the logic of Christianity has given shade to a good many people wishing to avoid the God of the Bible. But are these two solutions the only way to make sense of the God of the Bible? The answer is no, there is a third possibility. According to Gregory Koukl: “The third option is that an objective standard exists (this avoids the first horn of the dilemma). However, the standard is not external to God, but internal (avoiding the second horn). Morality is grounded in the immutable character of God, who is perfectly good. His commands are not whims, but rooted in His holiness”

The source of goodness is not arbitrary or based on moods or preferences that can change. Nor is the standard for goodness a law outside of God. Goodness finds its source in God’s character, and the standard of goodness is God’s character itself. Things are not good just because God says they are; they are good because they correspond to His perfectly good character. God’s intentions and purposes are strictly informed by His character. The degree to which something does not correspond to God’s omnibenevolent character is the degree to which that thing is evil.

The point is that to say something is evil is to say that there is an objective, transcendent, personal being whose will is being violated or whose order is being disturbed. In short, to say something is evil is to claim there is a God. In fact, the existence of evil is one of the most powerful evidences for God. Without the existence of God, the idea of evil becomes unintelligible. It is nothing more than a means of selection in a world governed by atoms and molecules. As a result, the problem of evil is not a problem for the Christian. Rather, the problem of evil is a problem for unbelievers. 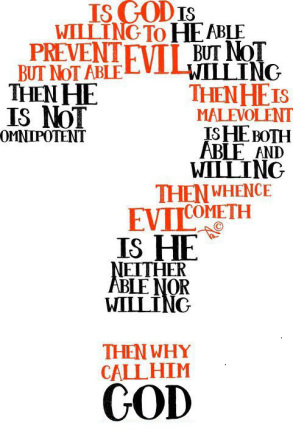 Why Does God Not Destroy Evil then?

We have seen how God could allow evil and that the existence of evil is compatible with God’s character. But if God is all-powerful, omnibenevolent, and omniscient, why doesn’t He just destroy evil? The answer may have to do with our moral character. Because we are made in the image of God, human beings have the ability to make choices that have a moral dimension to them. This choice is the essential prerequisite for true love to be possible.  However, because of sin our choices are not made in order to please God, but to please self. The fall has oriented our choices away from the love of God and towards a love for me. These fallen choices are what introduce evil into the world. For God to destroy evil, He must take away the ability of His creatures to introduce evil into the world. But to do that God would also be destroying the ability to do the greatest moral good as well, and that is to be able to love. Thus, for God to destroy evil would ultimately be evil itself since it would take away the greatest good—the ability to love God. Norman Geisler and Ron Brooks note, “If evil is to be overcome we need to talk about it being defeated, not destroyed.”

The Only Solution to the Problem is Jesus

The main answer, however, to the problem of evil is the person of Jesus. If moral evil that you have committed is what plagues you, then Jesus takes the punishment that you deserve and pays for it Himself by His death. If you are a victim of someone else’s moral evil, then either Jesus pays for it with His death or He sits as judge and punishes the person responsible. Whether Jesus pays for or punishes moral evil depends on the response of the person. Either way moral evil finds its remedy in the perfect obedience of the life of Jesus and His death on behalf of those who believe in Him for the payment of sin. He will either judge or justify every person who ever lived.

Jesus is also the solution for natural evil. In His resurrection we see Him not just restored to His physical body, but to a glorified state. His resurrected body cannot die, get sick, or be corrupted in any way. This indicates a fulfillment of the way things were intended to be, an achievement of the goal to which all things are moving according to God’s good purpose. This demonstration gives an answer to those who are suffering from physical or natural evil. The blind shall have their sight restored, the deaf shall hear, the crippled shall walk, the mentally handicapped shall think clearly. More than that, there will be no more tsunamis to kill thousands of people, no more hurricanes, tornados, floods, sickness, disease. All things will be not just restored to their state before the fall, but will attain the good purpose for which they were created. Jesus overcame both moral and physical/natural evil. He alone is the solution. Evil is only a problem for those who refuse Him.