There are many today who try to argue that Noah’s flood only referred to a local or regional flood, not a global one. My goal here is to not and try to lay out the physical evidence that the latter indeed was the case (though I believe there are many such evidences), but to show that any believer who holds to the authority of Scripture cannot interpret the flood as anything other than a global flood.  Based upon an exegetical examination of the text, this article will argue that the text of Genesis 6-9 cannot sustain a localized or regional flood, but only a global one. Here are five textual reasons why the flood must be read as global. 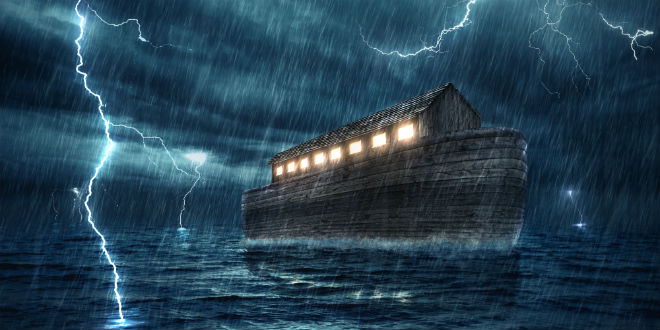 The first argument for why the text does not support a local flood is found in chapter 6. The reader is given insight into the mind of God, and his reason for bringing the flood (6:5-8). The words in these verses are very revealing as to the extent of the destruction to which God plans on bringing. In Genesis 6:5, it says that “The LORD saw that the wickedness of man was great in the earth, then in verse 6 it continues, “the LORD regretted that he had made man on the earth. Though אָ֑רֶץ (earth) can also be translated as land, as it is in Genesis 4:16 when referring to Cain settling in the land (אָ֑רֶץ) of Nod, the context of this passage clearly reveals that God has the entire earth in mind as the extent of his judgment.  Genesis 6:7 states, “So the LORD said, “I will blot out man whom I have created from the face of the land, man and animals and creeping things and birds of the heavens, for I am sorry that I have made them.” What makes these additional objects of judgment so important is that it expands the extent of the judgement over all of God’s living creatures. With the inclusion of the land animals and the birds of the heavens it is clear that God intends to leave no area where these creatures can escape from being blotted or wiped out (מְחֶ֨ה).

2. The inclusion of both the pairs of animals and birds on the ark to preserve their kinds.

In Genesis 7, Noah is commanded by the Lord to not only take his family into the ark, but to also take seven pairs of clean animals, a pair of the unclean animals, and seven pairs of the birds all of which are male and female pairs in order “to keep their offspring alive on the face of all the earth” (7:2-3). The ark is not only a form of salvation for Noah and his family, but it is also the means by which God is preserving all the kinds of his creation, in order that after the flood these different kinds would still exist in the world to fulfill their mandate from Genesis 1 to “be fruitful and multiply on the earth” (1:22). It seems trivial for God to go to such an extent to ensure the continuation of these different kinds on the earth, if the extent of the flood will only be local or regional.

3.  The use of the Hebrew וַיִּגְבְּר֥וּ (prevailed) in relation to the flood waters over the earth.

4. The consistent use of comprehensive terms (all, every, whole) reveals the writers intent to outline the entirety of the earth and the living creatures.

The use of comprehensive terms like, all, every, and whole illustrate that the author’s intent was clearly to describe the entirety of all the creation that existed on the land and in the skies. The comprehensive terms are not used sparingly, they are used in almost every reference describing the extent of the flood. For instance the following descriptions regarding the extent and effects of the flood water leave little doubt that a straightforward reading would allow only for a global understanding of the flood: “… on the earth that all the high mountains under the whole heaven were covered… And all flesh died that moved on the earth… all mankind… Everything on the dry land in whose nostrils was the breath of life died” (Genesis 7:19-23). It is clear that the author intends that this flood is to be seen as a comprehensive one that covered all the earth, not just a local one.

5. The comprehensive nature of the Noahic Covenant.

After the flood waters subsided from the earth, and Noah and all the creatures in the ark stepped onto the ground. God made a covenant with Noah, and the language of the covenant reveals that God’s judgment had been poured out over all of creation with the flood as His instrument of judgment. First, God reinstates the commission to Noah and his sons that he first gave to Adam and Eve to be fruitful and multiply in order to fill the earth (Gen. 9:1). This command is repeated again in verse 7 of the same chapter emphasizing God’s desire to repopulate the earth and mankind which had just been destroyed en toto (entirely). Secondly, the covenant is not only made with mankind, but with the totality of the created order, “Behold, I establish my covenant with you and your offspring after you, and with every living creature that is with you, the birds, the livestock, and every beast of the earth.” God is promising the totality of all the created order to never destroy it again by the means of another flood, which is clearly an argument for a global flood, not a mere local one.

I believe based upon these five observations noted above that a straightforward reading of Genesis 6-9 allows only for one interpretation, and that is that the flood was an instrument of God’s judgment over the entirety of the earth. Regardless, of what evidence you want to try and bring forth, no Christian should ever try to undermine the global reality of the flood, less they abandon the clear meaning of the text in the process.