501 Years ago today, an Augustinian monk Martin Luther, nailed his famous 95 Theses to the door of the Castle Church in Wittenberg, Germany. Hoping to simply debate the matters which he addressed, little did Luther know that God was providentially moving to bring His church out darkness and back into the light (post tenebras lux). The Protestant Reformation was launched and through the work of Luther, Melancthon, and many other great reformers the 5 solas of the Reformation were forever established as pillars for the reformed: Sola Gratia (Grace Alone), Sola Fide (Faith Alone), Sola Christus (Christ Alone), Sola Scriptura (Scripture Alone), and Soli Deo Gloria (The glory of God alone). These 5 Solas simply show us this great truth: That salvation is all of God’s Work, entirely and sufficiently revealed in God’s Word, and therefore God and God alone receives all the glory. 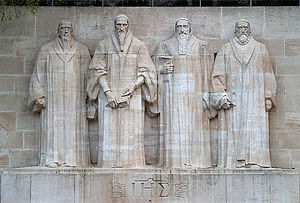 There are many today who would argue that the Reformation is over, that to simply keep rehashing these things is to give ourselves to division. However, that is a fundamental misunderstanding of not only the Reformation, but of the sinful act of purposefully dividing the body of the Lord. The Reformation birthed the principle known as “Semper Reformanda” (Always Reforming). This principle was not merely an arbitrary standard by which a church is to continue changing and reforming based on their own principles as to what they think they should believe or practice as church. NO!!!! Semper Reformanda was a logical conclusion on the basis of the doctrine of Sola Scriptura. In other words, the church is to continually seek to bring itself into full conformity with what the Word of God teaches in matters of both doctrine and practice, and that this reformational process must continue until the Lord comes and fully consummates his Kingdom and makes all things new. In other words, until the Lord comes we as Protestants must be people of the Word, constantly aligning ourselves with the precious teachings therein, and we must be unashamed in doing so.

Unfortunately, it is easy to see why so many believe the Reformation is over, primarily in the European and American churches. Though they may not say it, it is clear in the actions of most professing evangelicals and mainline Christians today that Sola Scriptura no longer matters. Scripture has been jettisoned for topical teaching, trendy punch-line sermons, and establishing doctrine based upon what is or is not relevant in the culture at the time. I do not say any of that with the haughty arrogance of soapbox pride, but through glossy eyes and a broken heart. Lest you think I am simply making this up because I “don’t like how others do church,” I would simply and lovingly correct you and say that has little relevance to do with this subject. Ligonier Ministry recently did a survey of Evangelicals across America and the findings were a horrific indictment on the state of American Christianity. Some of the findings include: 51% of American Evangelicals believing that God accepts the worship of all religions (undermines the exclusivity of Christ), 71% believe that Jesus is the first and greatest being created by God (undermines the deity and eternality of Christ), and 60% of evangelicals believe that religious belief is all about personal opinion, not objective truth (Undermining the authority of God’s revealed Word). These are just a few of the troubling findings that are outlined in the “State of Theology. You can see more results by following this link: State of Theology.

All of those statistics are the result of words spoken to the prophet Hosea 2700 years ago:

“My people are destroyed for lack of knowledge;
because you have rejected knowledge,
I reject you from being a priest to me.
And since you have forgotten the law of your God,
I also will forget your children.” – Hosea 4:6

This knowledge is no special knowledge passed down through traditions or some mystic magisterium, it is the precious and pure knowledge found in Holy Scripture. Our jettisoning of Sola Scriptura, that Scripture alone is the final arbiter on all matters of the faith, has led to the decline and sad state of American Christianity. The church has far too often made itself the end rather than God. Pastors preach and dress in  a way that they would receive the glory, rather than the Mighty God they are called to serve as heralds for. The average lay person expects to be spoon fed milk sermons for the sake of entertainment and experience, rather than demanding to be fed the savory meat of God’s word and indulging in the meat themselves, which both pricks the conscience and brings the person one step at a time along the sweet process of sanctification.

When we remove the centrality and authority of Scripture in our lives, we fundamentally undermine the glory of God. There is no greater attack on a Holy God than to say your Word is not enough, it is not relevant, and it is not sufficient today to continue to adorn your precious Bride with knowledge and drive her to action. So as long as the Word continues to be undermined, and Christianity is denigrated to Moral Therapeutic Deism, we will always be reforming back to Scripture because our chief end is to glorify God and enjoy him forever. 501 years later, the Reformation still matters because God still deserves all the glory.

One thought on “Soli Deo Gloria: Why 501 Years later, the Reformation still Matters.”