The Context of Luther

Martin Luther was born in 1483 during a time when the Renaissance was permeating throughout all of Europe with the invention of Gutenburg’s printing press. He was born to a copper miner and grew up in Mansfield in the center of Germany’s mining industry. Luther originally went to the University of Erfurt at the age of eighteen where he trained with the intention of becoming a lawyer. However, not long into his studies, Luther, during a lightning storm, was merely struck by lightning and in a moment of sheer terror cried out to St. Anne that if he would be spared he would become a monk. Very much to the displeasure of his parents Luther became an Augustinian friar and began his study of theology.

Much of the theology that was espoused in the university at this time was the Scholastic theology of William of Ockham and Gabriel Biel. The major tenants of this Neo-Pelagian scholasticism was an emphasis on natural free will, effort, and merit in obtaining divine grace. This kind of theology drove Luther to deep despair as he saw it nearly impossible for how once could possibly merit favor from a holy God in their deeply sinful state. His mentor Johann von Staupitz was a strong Augustinian in that he held to the theology of God’s sovereign and unconditional grace, and he used this teaching to comfort the young Luther, that it was God’s free and undeserved mercy that Luther could trust in to find hope. During his time as a lecture at the University of Wittenberg, Luther began to fully articulate and define his understandings of what have become known as salvation by grace alone through faith alone in Christ alone. In early April 1517, Luther launched a war against Scholastic theology, most namely the sale of Papal indulgences.

In Roman Catholicism, an indulgence means the remission of the temporal (not eternal) punishment of sin (not of sin itself), on condition of penitence and the payment of money to the church or to some charitable object. Though it may be granted individually by bishops or archbishops, the Pope has the authority and power to grant it to all Catholics. The doctrine grew out of medieval theology, and was fully theorized and justified by Thomas Aquinas. The building of St. Peter’s cathedral provided the basis for Pope Julius II and Pope Leo X to raise funds for the project by the selling of indulgences. During this time a great hawker of indulges, Johann Tetzel began to do his biddings around many areas associated to Luther. Many received Tetzel as a messenger of heaven who would be able to free their loved ones. These preachers of indulgences urged the people to buy these indulgences for their own benefit and the benefits of their departed loved ones. The preachers would exhort that the people’s loved ones would be released form purgatory as soon as “the penny tinkles in the box. This type of teaching greatly unsettled the young Luther as he could not find anything like it in Scripture, he saw nothing of this kind of grace in the Bible. Luther was asked to defend his views against John Eck in a public debate at Leipzig. The debate became much more of a debate over doctrine as Eck pushed Luther to debating the very nature of authority. After the debate a Papal bull was given to Luther warning of execution, Luther burned it in open rebellion. In 1520 he was called to the Diet of Worms where he was called to recant of his views by Emperor Charles V. Luther did not recant, but gave his famous “Here I am, I can do no other” speech. The split from Rome was finally complete.

The Teaching of Luther

It is interesting to note that though Luther is most known for kick starting the Reformation with his 95 theses, much of his teaching on grace and justification began to evolve during his time as a professor at the University of Wittenberg where he taught theology primarily using Paul’s letters to the Roman’s and Galatians. During this time Luther became convinced that Paul’s phrase “the Righteousness of God” (Rom. 1:17) was a righteousness that God freely gives to sinners as a free gift of salvation.

Six months prior to the posting of the 95 theses against indulgences, Luther published 97 theses against Scholasticism whereby he called for a return to an Augustinian view of grace and salvation over against the semi-Pelagianism that had become the primary view under teachers like Aquinas. In some of the 97 theses, Luther began to comment on the nature of grace. Some of the theses Luther wrote include, “In fact, without God’s grace the will produces a perverse and evil act” and “The law of God and the human will are two enemies, which can never be reconciled apart from the grace of god,” and “But the grace of God makes righteousness abound through Jesus Christ, who causes us to love the law.” For many the medieval notion of grace, was that by which God continued to dispense out upon believers as they lived obedient to the sacraments and the teachings of Christ, whereas for Luther grace was God’s attitude of favor by which he freely poured out on undeserving sinners. There was nothing that merited this good favor of God, but that good favor in turn produce good merits on behalf of the believer. A perfect example of this teaching can be seen in Luther’s treatise The Freedom of a Christian where he wrote, “Behold! Without any merit on my part, by his pure free mercy, my God has given me in Christ all the riches of justification and salvation, although I am an unworthy condemned sinner.”

Luther so abhorred the teaching that a person could merit God’s grace through the buying indulgences or by performing “good deeds.” Luther fully believed that even the most righteous deeds of a person “were as filthy rags” to the Lord (Isa. 64:6). Luther believed it was an affront to Christ to teach grace as a response to obedience to the Law. Luther wrote, “In our day we are taught by the doctrine of men to seek nothing but merits, rewards, and the things that. Of Christ we have made only a taskmaster far harsher than Moses. Luther saw this grace as all-encompassing though. Luther distinguished between justification and sanctification, but he did not separate them as he did not imagine that one could exist without the other. Luther taught that the free undeserved grace of God would bring the undeserving sinner from justification to glorification. 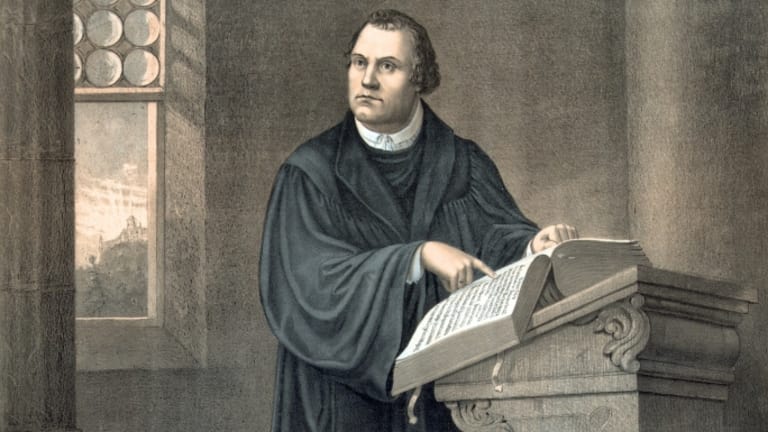